The ANILE-8R was not the first Anytone Tech model I unpacked, but it will be the first to be reviewed thanks to its simplicity.

Baofeng vs Anytone
In terms of design this radio resembles the Baofeng BF-666S/BF-777S/BF-888S series: 16 channels, no thrills no frills, no display – just on/off/volume, a flashlight and a 16-channel selector. Both radios tell you which channel is active by using a speech processor. Based on this the two radios could be regarded as competitors.

I kept my Baofeng BF-666S in spite of its generous amount of flaws: the receiver can be trashed by about any out-of-band signal or mixer product, the oscillator isn’t stable (phase noise, which causes reciprocal mixing), and RX audio sounds raw, unfinished even. TX audio however is fine, battery life is great, and the price (below $20) is hard to beat.

The consequence of Baofeng’s cheap design is that I only can use the radio when I’m far enough away from any RF pollution. As you can imagine I was very curious if the ANILE-8R would outperform the Baofeng or not. 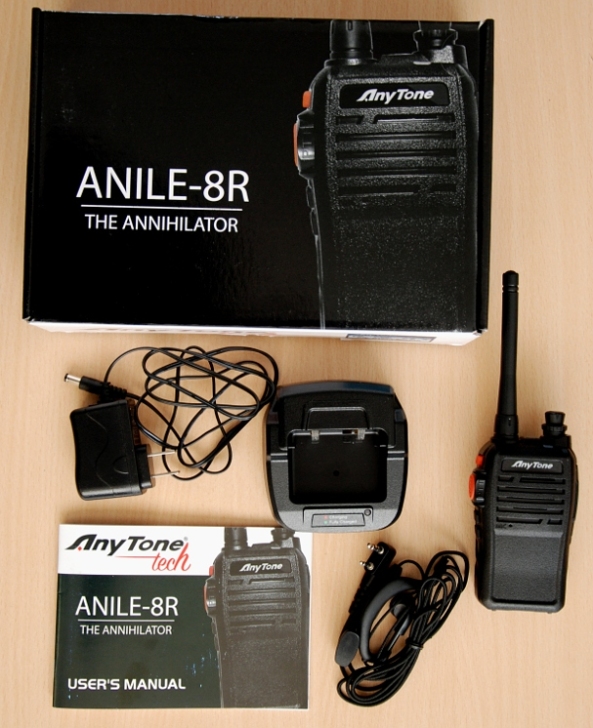 Build quality
These radios are ideal for outdoor activities, because there’s not much you can break. The Baofeng already did well, but the Anytone feels much sturdier. It’s well built.

Side keys
There are three side keys and you can program them yourself. At default the upper key will switch on the flashlight, the middle one will tell you the remaining battery voltage, and the last one will bypass the squelch (monitor).

Phase noise
The first thing I looked at was phase noise. During instruction evenings I use the Baofeng as the prime example of poor design; all I could hope for was that Anytone did a better job. They did.

The first image shows the Baofeng (notice the wide ‘shoulders’ which shouldn’t be there), the second image is the Anytone. I slightly zoomed in on the Anytone carrier to get a better view.

Harmonics
The Baofeng has no detectable harmonics, the ANILE-8R has one at -57.62 dBm. It’s just short of the -60 dBm I like to see, but nothing to worry about. 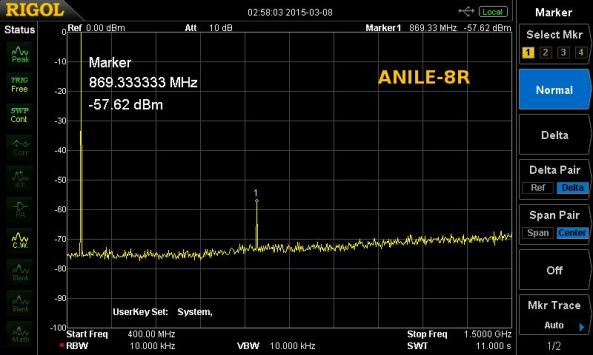 TX audio: loud and clear, just excellent. The most memorable quote from a listener was “I can’t tell the difference between this one and your gear at home.”

Frequency accuracy of this sample: -26 Hz.

Front-end: good. Unlike the Baofeng, the receiver doesn’t collapse quickly.

Bugs:
I noticed that RX audio muted when I switched on the flashlight. Audio stayed muted while a signal was present. Audio came back after:

Toggling the flashlight on/off had no influence.

I forwarded the bug to John K3NXU (Miklor) and the owner of Anytone Tech. It didn’t take long before my findings were confirmed. However, a few days later I found an option in the software which caught my eye: “Eliminate Squelch Tail When No CTCSS/DCS Signaling”. The default value was 55.2 Hz. When set to ‘Off’, the strange influence of the flashlight on reception is gone. Problem solved.

Conclusion:
Anytone Tech’s ANILE-8R is a very good radio and can make you forget the Baofeng BF series. Only when I start nitpicking I could make a remark about the belt clip. It didn’t seem to be designed for this radio, as there was quite a gap between the clip and the battery. I solved the problem by bending it a little bit.