Over the years, one of the ‘most heard’ NDB signals from Alaska was the decades-old beacon located near the western tip of the Aleutian Islands at Adak.

'ADK' had been around in one form or another since WWII but it suddenly vanished from the air in 2012. Like numerous other NDBs in Alaska, as well as in the lower 48 and Canada, once officially NOTAM’d (Notice To Airmen) as shut down for ‘maintenance’, they often never return.

Such was the case assumed by all NDB DXers with regard to ADK, especially following the cryptic 2015 NOTAM announcing a permanent closure. It was hard to believe that this early-morning regular was now gone for good.

Transmitting on the lower edge of the AM broadcast band (530kHz), ADK was often stumbled upon by wayward BCB DXers or sought-out as a good propagation indicator for the pre-sunrise Asia-North America path on the BCB. I’m sure that some even heard it on their analog car radios back in the day when many of them would tune down as low as 520kHz!

All that changed this weekend when Dan, VE7DES, a regular weekend-contributor to the RNA database, found ADK had risen from the dead after all these years and was putting a nice signal into the southern west coast of Canada!

It seems that ADK’s antenna had been blown down in the summer of 2012 which explains its sudden demise. An FCC employee in Alaska has indicated to me that in recent months there had been much interest in reviving ADK which would apparently allow more airlines access to the field than had previously been the case ... whatever the reason, NDB DXers are delighted to hear their long-lost friend once again!

Hopefully it stays around for many more years yet, but just in case, why not give a pre-dawn listen for its CW identifier on 531.034kHz, with your receiver in the CW mode. Long haul propagation can often be excellent in this part of the spectrum in the early morning and ADK has been logged from Hawaii to Illinois.

Here’s how ADK's 25 watts sounded here this morning at around 0530 local time.

For our 243rd Co-ordinated Listening Event, coming in a few days, we can expect a bit of a challenge.

Yes, it does include most of the DGPS beacons - and 50 kHz wide is about three times more than usual, but we shall only be listening for the 'NORMAL' NDBs.

We last searched for NDBs on these frequencies in February 2018 when a record 59 of us took part in CLE229.

We shall all have at least one end of the range for some easy listening, but the main challenge will be to find the Morse signals among those DGPS noises.

REU and RNA show that, in the last 18 months, about 310 and 200 normal NDBs have been heard in this range by listeners in Europe and North America respectively.

There are also several to be heard by members away from Europe and North America, as you can see in the map from RWW, below. 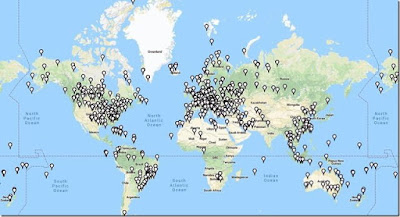