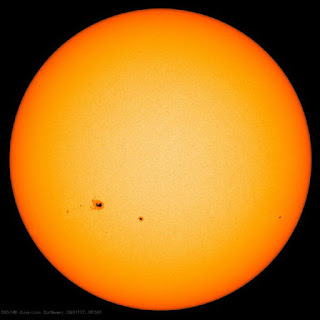 Blog readers may remember my previous blog discussing a more optimistic prognosis for the just-starting solar Cycle 25. It described the then recently-published scientific paper whose conclusion was rather startling:

"... we deduce that Sunspot Cycle 25 could have a magnitude that rivals the top few since records began."

The scientific paper described the exact opposite of any and all predictions that I have read or have seen referenced, and at the time of publication, was surely a bold and risky claim for the paper's authors. (1)

An over-simplification of the methodologies used to develop their prediction describes the study of the complex relationship involving the Sun's 22-year (Hale) magnetic cycle, the end points of adjoining cycles called 'terminations' and sunspot production, to predict the eventual strength of the new cycle.

The end of the cycle or ‘terminator’ event plays a significant role in the new cycle’s progress, as the shorter the separation between adjoining terminators, the stronger the next cycle will be. The possibilities of Cycle 25 being a truly strong one depends upon (according to the paper) a terminator event occuring sometime before the end of 2020.

Although there has been no official announcement as of yet, it appears that the termination may be presently occuring. Again following the paper, the termination event will produce a sudden and marked upturn in the growth of solar activity and will in fact, switch on suddenly within one solar rotation. As startling as this sounds, it appears to be exactly what is happening on the Sun right now.

Just one week ago, the Sun’s solar flux stood at ~79 sfu (Solar Flux Units) but has climbed rapidly to 110. With several active sunspot regions on the earth-facing side of the Sun and several actively flaring groups about to rotate into view on the backside, it seems as if this sudden growth may be sustainable.

What is particularly encouraging is the activity level of the earth-side spots as well as the ones coming around, with several C and B-class flares continuing to push the flux higher.

Although it will likely slow and subside, a key indicator of future strength will be the time that it takes to recover and climb again.

Another interesting gauge of a new cycle’s possible future strength is the number of months needed to reach an average monthly SFI of ‘90’. Strong cycles tend to climb early and rapidly, in order to reach their lofty heights.

The strongest cycle on record was Cycle 19, the grandaddy of them all.

Compared to anything before or after, it was a magnificent monster of a cycle for ham radio. Cycle 19 reached the magic SFI 90 value in only 18 months ... Cycle 25 has reached this same point in just 12 months! If this is indeed an accurate marker for cycle strength, and there is no reason to believe otherwise, then maybe we should all hold onto our hats.

We’ve been told for several years by those who know these things, that Cycle 25 would likely be a repeat of the poorly-performing Cycle 24, or even weaker. I think one thing  that can now be reasonably surmised is that this isn't another Cycle 24! We should know shortly, if Cycle 25 is the real thing or not, once the termination event has been confirmed.

In the meantime, enjoy the wide open strong signal opportunities now playing on 10m ... the band is back once again and in fine form ... way earlier than anyone ever expected!

Finally the computer issue is solved. 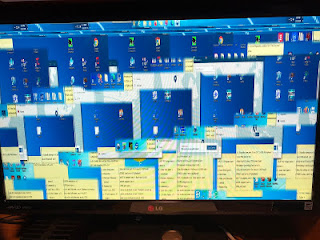 A short time ago I posted about a computer issue which had my monitor screen now and then after the system started looking like the picture above. It only happened now and then on startups and I was not really concerned about it. I knew that over time it would get worse and it did......The consensus regarding the issue seemed to centre around the graphics card. I removed my PC from under the desk (easier said than done) opened it up and checked to see if the graphics card fan was working and it was, checked to see if it was seated firmly and it was. I then changed out the DVI-I cable from the PC to the monitor. For a time things seemed to be going just fine until a few days ago.

I started my PC and when to do somethings while it started and when I returned to the room the monitor was black no desktop was being displayed. I moved the mouse around thinking the monitor went to sleep but that did not fix the issue. I powered the monitor off and on via its power button and nothing. I then restarted the PC and all was ok.  Now I am thinking the graphics card is on its way downhill finally. I restarted the PC several times and once in a while I was greeted with the black screen but not always. I then found I did not have to restart the PC to fix the black screen issue but rather just turn the monitor off and on several times.......interesting.  One time after the PC had restarted and the desktop was being displayed without issue I then started to turn the monitor off and on to see if I could get the black screen issue to pop up. While I was doing this the screen looked like the above picture with just simply turning the monitor off and on again......interesting. I am not suspecting the monitor to be the issue which is cheaper than a sound card. I had the monitor connected via a DVI-I cable so I then removed that and tried an HDMI cable. A very short time later had the same issues again, so it was not a cable issue. I have a second monitor that I use with the Icom 7610 as a radio display. I decided to connect it to the PC and enable my dual monitor option on my video card. This way I can use both monitors at the same time and see if both monitors display the same issue of just the troubled monitor.

It only took a few restarts before the suspect monitor was black but the smaller monitor was working just fine which confirmed to me it was the monitor all along.  A new monitor was ordered and should be here in a few days. At this point time time the suspect monitor only acts up only on startup or if I cycle it off and on. Once it is working I have no issues with it, I am thinking that over time this is going to change as the monitor gets worse the reason for ordering a new one. This weekend is the CQ WW DX CW Contest and I am hoping my monitor will last me until the end contest. I want to reconnect my other monitor to the Icom 7610 as it is very handy to have during a contest.


Mike Weir, VE9KK, is a regular contributor to AmateurRadio.com and writes from New Brunswick, Canada. Contact him at [email protected].

The theme of this year’s Dayton Hamvention is The Gathering, not to be confused with the annual Insane Clown Posse event of the same name. Out of an abundance of caution, Insane Clown Posse cancelled their 2020 event, prompting several folks to call them Reasonable Clown Posse.


Anthony, K3NG, is a regular contributor to AmateurRadio.com.

Welcome to the 381st episode of Linux in the Ham Shack. In this short topics episode, the hosts discuss SpaceX, the spectrum around 5.9GHz, Open WebRX, the non-free part of free software, the latest release candidate of WSJT-X, Kali Linux and much more. Thank you for listening and have a fantastic Thanksgiving week.


Russ Woodman, K5TUX, co-hosts the Linux in the Ham Shack podcast which is available for download in both MP3 and OGG audio format. Contact him at [email protected].

In this episode, Martin M1MRB is joined by Chris Howard M0TCH, Martin Rothwell M0SGL, Ed Durrant DD5LP and Frank Howell K4FMH to discuss the latest Amateur / Ham Radio news. Colin M6BOY rounds up the news in brief and this episode’s features is an Interview with Wade, VK1MIC.

We would like to thank Peter Caffrey - WX6Z, Jack Haefner and our monthly and annual subscription donors for keeping the podcast advert free. To donate, please visit - http://www.icqpodcast.com/donate


Colin Butler, M6BOY, is the host of the ICQ Podcast, a weekly radio show about Amateur Radio. Contact him at [email protected].

The light-bulb dummy load has been used with HF transceivers from way back in the old days (and sometimes more recently). Also, the Lightbulb QSO Party promoted the use of light bulbs as antennas.

I wanted to find out if I could do the same thing with a 5W handheld transceiver, so I scavenged a bulb from an old string of Christmas tree lights and hooked it up to my Yaesu FT-60. This video shows what happened next.

I checked the SWR on the light bulb and found it to be 2.7. I was not worried about damaging the handheld radio because they are designed to work into crummy antennas such as the standard rubber duck.

I hope you enjoyed this fun experiment. Sorry about the amateurish video quality…I just shot it with my iPhone and did some simple editing.


Bob Witte, KØNR, is a regular contributor to AmateurRadio.com and writes from Colorado, USA. Contact him at [email protected].

How to Set Up a Ham Radio Blog
Get started in less than 15 minutes!